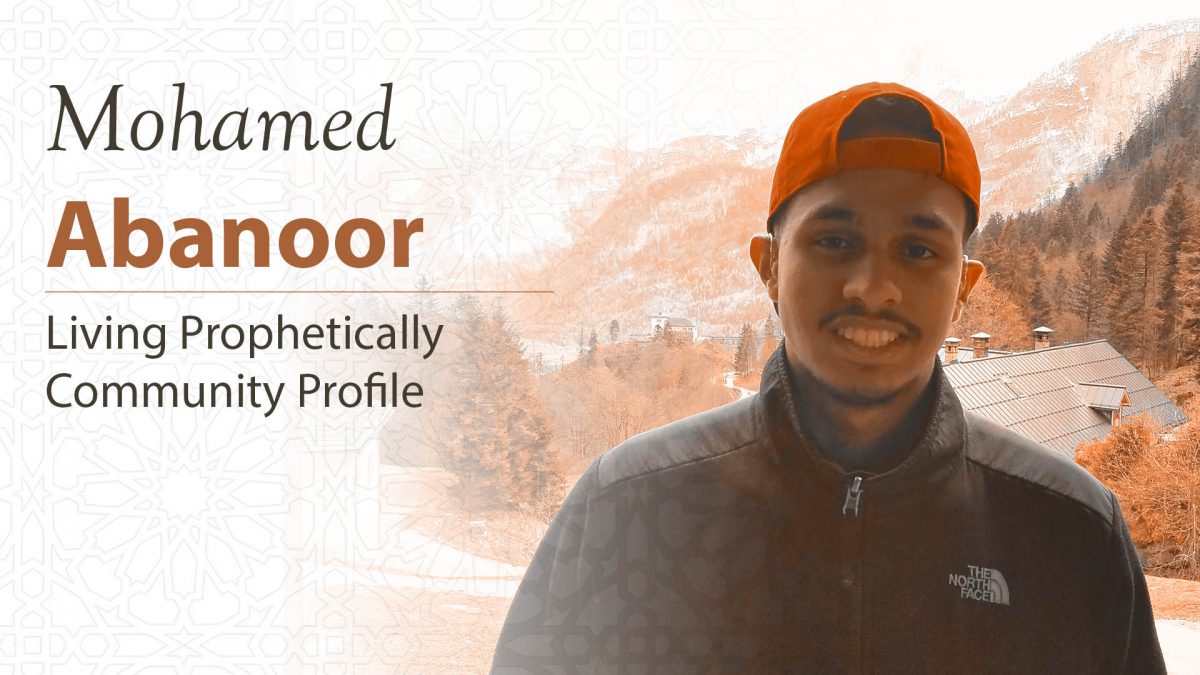 Among the central gifts bestowed upon the ISBCC by Allah has been those incredible community members who have practiced a Prophetic ethic and modeled it for all of us through their actions. People like Muhammad Ali-Salaam, Justice Ismail Laher, and Boston’s very own Ella Collins teach us through their stories and struggles how to follow in the footsteps of our beloved Prophet (SAW) in contemporary life. Each month the ISBCC will be featuring a Living Prophetically Community Profile to highlight how one of our own has been an exemplar of the Prophetic life. We pray that we can learn from these great models and implement their ethos in our lives.

What do we mean by Living Prophetically?

This month for our Living Prophetically Community Profile is seventeen-year-old Mohamed Abanoor. Through acts of service in his community he serves as a role model for us all to realize our full potential and find our own path to become productive members of society. A student at the Horace Mann School for the Deaf and Hard of Hearing, Mohamed Abanoor looks to empower his peers through participating in programs like the Boston Police Explorer and Arkanum; ISBCC’s Youth Program. He has volunteered for years for one of the hardest jobs at the ISBCC - parking attendant during Ramadan. This inspiring youth leader is driven to serve others for one simple reason, “If I have struggles in my life I go serve others and work with other kids. Helping others makes me feel better and forget my struggles”.

Mohamed Abanoor sits down with us for a Q & A to discuss more about his acts of service and what drives him.

What’s your current position at the Boston Police Department? How long have you been in this position? Can you give me a brief overview of what it is you do in your work?

I am part of the Boston Police Explorer program. I have been in the program for 2 years; since 2016. In this program, I learn about the law (as it relates to police enforcement). We participate in trainings with police officers once a week and go through their routines. After, we take those lessons to the youth and high schoolers. I support the work of the police officers by teaching young high school students what to do in high stress situations such as a shooting or an emergency situation.

The Boston Police Explorer is good program for high schoolers who are interested in becoming police officers. You get the opportunity to know more about police work and civic engagement.

What would you say most motivates you to participate in the Boston Police Explorer program? What are the goals you most want to accomplish in your work and personally?

I ultimately want to represent Somalis, but another element to that is I also have hearing loss. But I think I can still have a lot of impact as a member of the police force. I am Muslim, Somali, and hard of hearing. There aren’t any deaf people within the police force teams across the U.S. and I want to be that first representation for the deaf community.

I feel very supportive by the police officers and I know many of them. I have good relationships with Boston Police Chief William Gross and Sargent Samil Silta. They are working with me to begin the process to become a police officer. I definitely feel like this is the way I can make a difference in our community.

Being a part of the Boston Police Explorer has helped me learn about police enforcement, law, and civic engagement.

Before Arkanum, I joined Deen14 at the ISBCC and went every Saturday. However, the program ended. Soon after, Arkanum began and I knew the kind of activities and team building opportunities would be similar. I said to myself I have to join this program because it would a great opportunity and experience for me. I received a lot of experience working with the younger kids from ages 7-12 years and worked with them so they could build strong relationships with each other. For me volunteering at Arkanum is very important to me. I love working with the community.
I love to getting to know everyone part of Arkanum and their background. Arkanum provides different activities all the time (for example icebreakers) that makes it fun to get to know each other. We work on weekly projects together. I love seeing the kids so happy doing the activities. Also Arkanum is a program where you can learn about Islam. I think the way we learn about Islam at Arkanum is the best. Arkanum has everything I need and that motivates me to keep coming back and volunteering.

Did you have any key mentors or people who deeply influenced who you are, what you believe in and what you’re committed to in your work and life? Tell me about them.

I do have a couple of people who I look up to. But the number one person is Abubakr Fakhry, the Arkanum Youth Director. He has a lot of impact on me because I am always learning from him. He has taken me on a lot of international trips through Arkanum. We travelled to Turkey, Spain, United Arab Emirates, and Malaysia. The travel opportunities he has provided me has opened my eyes to new things. Now I love to travel internationally. If I did not travel I would never know what is out there. It really has left an impact on me. Abubakr has also helped me improve my leadership skills. I used to be very quiet. Abubakr encouraged me to get to know everyone at Arkanum and now I feel like Arkanum is my second family.
Being a part of Arkanum has improved my leadership skills and has helped me be a better explorer at the Boston Police Department.

Did you have any experiences that put you on the path that led you to serve others? Tell me about them.

When I was little it was easy to adopt bad behavior and play around. But my parents really helped me learn to do what is right. Now that I know so many people and I am part of this community I want to keep being good. I never had that when I was younger. Now that I have so many friends and people who rely on me I don’t want to disappoint them and break their trust. My parents are a huge influence on teaching me how I should best interact with people.

What are the lessons & advice do you have for young people interested in embarking in service and what are your personal goals for the future?

The advice I would give them is to find your passion and share it with your community. If you think that you can make a change than go do it. I want all of us to look up to each other and be a positive role model. We shouldn’t be negative but we should be positive and support each other. Look for a good influence in your life.

In ten years from now, I want to have completed my bachelors degree and have become a police officer. I’ll still be in Boston because my goal is to be a Boston Police Officer. I want to be travelling around the state and advocate for Muslim and Deaf people. I hope I can one day teach something of value to the community.

*Some of the statements were modified, added and deleted for this article placement.