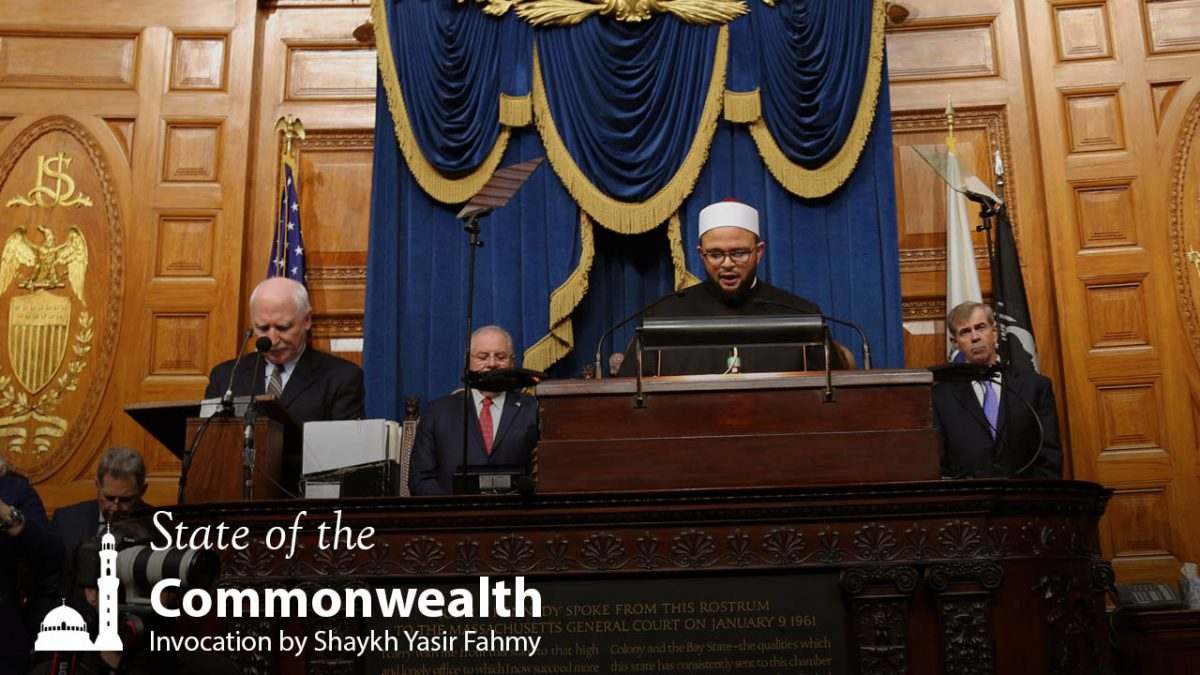 State of the
Commonwealth

On January 23rd 2018 Shaykh Yasir Fahmy was invited by Massachusetts Governor Charlie Baker to deliver the opening invocation for the Annual State of the Commonwealth address. Below is a the transcipt of Shaykh Yasir's invocation.

In the name of God the gracious the merciful,

My dear brothers and sisters of this commonwealth, in the Holy Quran God tells us “Oh mankind we have created you from male and female and we made you people and tribes that you may come to know one another. Surely the most noble of you before God are those most reverent of you”.

In this verse God speaks to the essence of the human condition. To the fundamental truth that despite our differences, which can be profound, we are here on this earth to live with, to care for, and to know one another.

This sacred spirit and divine guidance is captured in the works of our founding fathers. In the year 1776, quoting John Lock, Thomas Jefferson says “Neither pagan, nor Muhammadan, (i.e Muslims) nor Jew ought to be excluded from the civil rights of the commonwealth because of his religion”. Espousing the same sentiment, the Massachusetts constitution of 1785 promised the most ample liberty of consciousness to Deists, Muhammadans (i.e Muslims), Jews and Christians.

My dear brothers and sisters these words remind us of the kind of nation our founding fathers sought to bequeath us. A nation that up holds freedom of conscious, a nation that embraces religious pluralism and a nation that calls for the honor and dignity of all. Yet we also know that even as these visionary words were spoken slavery raged and the rights of woman were ignored. We know that racial quotas were implemented in immigration and Catholic and Jews here in our own state were not welcome as equals.

We understood early on that the vision of America we inherited was in fact a call for action and diligence. A gift but never one to be taken for granted, a blessing but not one fully realized for all.

Brothers and sisters this vision and dream we call America calls for principled and courageous leadership. A leadership that embodies the sacred spirit and the divine guidance of our Prophets and pious predecessors. From the wisdom and insight of Moses, and love and compassionate shepherding of Jesus, and to the mercy and justice of Muhammed may the peace and blessing of God be upon them all.

And so with that let us pray. Oh God, as we stand before you today in utter humility and with deep gratitude we pray you instill a sacred spirit and divine guidance in all of our hearts. Oh God, when a moment of our nation seems divided we seek Your aid in bringing our hearts together. Lord, we know at this moment what is called for is courageousness in leadership. We ask that You bestow that leadership on our governor Charles Duane Baker. We ask that you guide him to his highest self. Inspire him to always practice that which is most beloved to You and to best uphold your divinely inspired values and ideals. Guide him and all our elected offices to help remove that pain and division that has beseeched parts of our nation. And God we ask you allow us to see past our differences to work with one another for the betterment of ourselves, our state and our nation.